Himachal Pradesh is a place of immense beauty & charm. State is the home to some of the best tourist destinations in India, like – Shimla, Kullu, Manali, Dharamshala, Dalhousie, McLeodganj and many more. Himachal is well-known for its eco-friendly environment, colourful culture, natural scenery, warm hospitality by people and festival celebrations throughout the year.

Warm welcome to Delhi airport and transfer to Hotel. Depending upon the availability of time you can go for Delhi sightseeing. Stay overnight in hotel.

Early morning with rising sun, drive to Kalka Railway Station, depending upon the traffic, it will be around 5-6 hours drive. Our driver will drop-off at Kalka Railway station to board a Toy Train to Shimla. This train is declared as UNESCO’s world heritage site. Our driver will meet at the Shimla Railway Station and transfer to hotel. On-arrival in Shimla, check-in your hotel and overnight relax.

After breakfast you will be taken for sightseeing of Shimla which includes visit of Jakhu Temple, this temple is famous for world’s largest Lord Hanuman statue, located at the hilltop and can be seen from most parts of Shimla. Then drive towards Kufri – It is just 10 kms away from Shimla, although there is not much monuments or attractions to see in Kufri, but people visit to experience the panoramic view and few temples after enjoying trekking or adventures activities. Drive back to Shimla and in the evening you can enjoy a walk and visit the Church on the Ridge.

Morning walk into any bakery located at the Mall Road, enjoy the British style continental breakfast. Visit nearby local markets like Lakkar Bazaar. Later drive to visit Viceregal Lodge (Rashtrapati Niwas, Shimla). During the British rule, it was the residence of British Viceroy of India. Drive back to hotel and relax overnight.

Manali is famous as lover’s paradise, it is one of the famous hill station with its jaw dropping views, temples, museums and adventure activities all around the year. Enroute from Shimla to Manali, you can visit Naggar Castle - This Castle was built in 1460 A.D. with a unique blend of Western and Himalayan architecture by Raja Sidh Singh. Property has been taken over to government to run as a Heritage hotel since 1978.

On Arrival in Manali, check-in your hotel and overnight relax.

Start your Manali tour by visiting below attractions and monuments:

Hidimba Temple– This temple is dedicated to Hidimba (the wife of Bhima, one of the Pandava from Mahabharata). Temple is famous for three-day festival, which attracts people for folk dance performance.

Mall Road–Manali is famous for Tibetan and Himalayan handicrafts, and you can find some good shops on the mall Road.

Rohtang Pass– It is an experience of nature in one of the rawest forms possible. Amongst mountain peaks covered with snow, breath-taking view and white landscape. Rohtang Pass used to open from April to November for general public and it will require a permit and these passes are available in Manali and you need to get it a day in advance. While returning from Rohtang Pass, you should stop over at Solang Valley. Solang Valley – Also known as Snow Point, Solang Valley is famous for glaciers, snow covered landscapes and countless activities like paragliding, camping, Gondola (Ropeway), snowboarding & zorbing.

Drive back to hotel in Manali.

After having your breakfast, drive towards Dharamshala. Dharamsala is famous as the holy city of the Dalai Lama and shelters the Tibetan monk in exile. The city is separated as upper and lower division with different altitudes. The lower division is Dharamsala town itself and the upper division is known as Mcleodganj.

On arrival in Dharamshala, check-in hotel and after some rest leave for sightseeing.

Visit the Buddhist Monasteries – Dharamshala is famous for grandest & picturesque monasteries in India and have preserved the Tibetan and Buddhist culture. Even the most unreligious souls must visit them for beautiful & cultural experience that they provide. let’s look at them one by one and maybe you get instigated to visit one of them on your upcoming trip to Dharamshala.

Tsuglagkhang Monastery:This complex is the official residence of the 14th Dalai Lama and that’s why it holds immense importance for both Tibetan and locals. Here you can attend a teaching session by HH Dalai Lama himself by paying a nominal fee of INR 10.

After breakfast, we will start the Dharamshala sightseeing.

Dharamshala Cricket Ground– Nestled in the lap of the Himalayan mountain range, this stadium is located at the height of 1457 meters above sea level, and one of the highest sports grounds in the world. From here you can enjoy the surreal view of the Dhauladhar ranges.

Dal lake of Dharamshala– Lake is around 10 Kms away from lower Dharamshala and lies between Deodar tree and hills.

Bhagsu Waterfall – One of the most famous spots amongst the tourist in Dharamshala. The waterfall starts at the base of the Dhauladhar Valley, before cascading down, the stream also passes through the famous Bhagsunath Temple.

Drive back to hotel in Dharamshala or McLeodganj.

After breakfast, drive towards Dalhousie, this place will give you a feel of the Scottish and Victorian architecture and the ambience reminds you of the pristine British flavours. This Hill Stations is one of the favourites among most tourists travelling to Himanchal Pradesh and was also favourite summer destinations of the ruling Britishers.

After having your breakfast, drive to Khajjiar. Also referred as “Mini Switzerland of India”, Khajjiar is a small town around 20 Kms away from Dalhousie. This region also attracts tourist for adventure sports, like – horse riding, paragliding, trekking, zorbing, etc. Enjoy your day here with different activities and natural beauty and then drive back to Hotel in Dalhousie. Overnight relax in hotel.

Have your breakfast and drive towards Chandigarh, it will be around 7-8 hours drive will mid-way stops for refreshment. From Chandigarh to Delhi, there will be 2 options.

If you opt to drive from Chandigarh to Delhi, our driver will be available in the morning. After you finish your breakfast, our driver will take you straight to the Delhi International Airport. Tour End 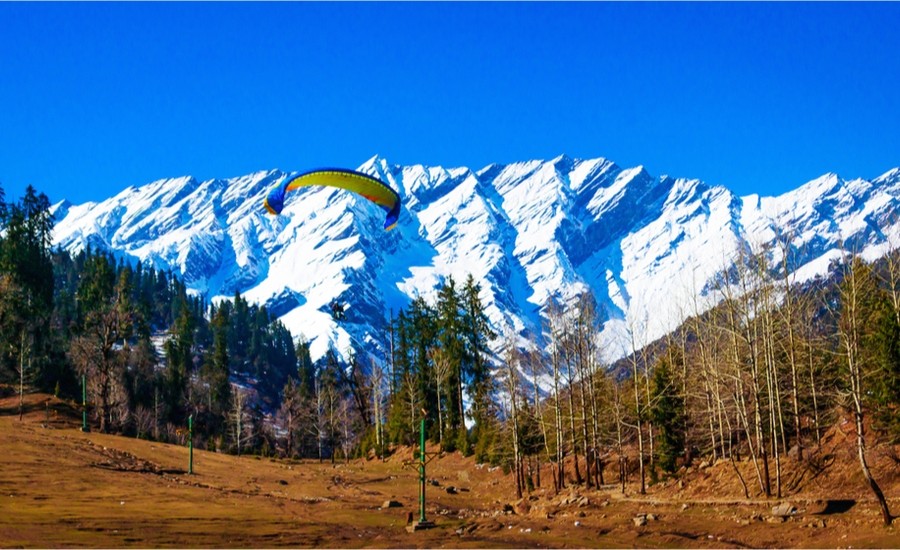