Rajasthan is a state located in the northwest of India. The main attraction for travellers is the Rajput heritage which is apparent in the forts, temples and palaces established by the Rajput Kings like Bappa Rawal, Rana Kumbha, Rana Sanga and Rana Pratap are also popular places to visit.

Depending upon your flight schedule, our company represetentative with driver will welcome at Delhi Airport and start drive towards Agra. It will be a 4-5 hours drive with one stop via Yamuna Expressway. On-arrival check-in your hotel and refresh, then our driver will be available for Agra Fort and Baby Taj sightseeing. Overnight in your hotel in Agra

Early morning with rising sun, visit the world-famous monument of love - Taj Mahal. Taj Mahal is famous for its enormous beauty. Monument is also recognized as UNESCO world heritage site and one of the Seven Wonders of the World because of its immense beauty. The symbol of love was made by Emperor Shah Jahan in the loving memory his wife and the most loved Queen in his Harem, Begum Mumtaz Mahal. After spending your good time in Taj Mahal complex, go back to hotel for breakfast and then head towards Jaipur, on your way to Jaipur, visit Fatehpur Sikri and Abhaneri Stepwell, also known as 'Chand Baori'. On-arrival in Jaipur, check-in your hotel and relax overnight in Jaipur.

After breakfast you will be taken for sightseeing of Jaipur which includes visit of Amber Fort, fort is one of the UNESCO world heritage sites, located at the hiltop. Then drive towards Jaipur city sightseeing includes - Jaipur City Palace - An imposing blend of traditional Rajput and Mughal architecture. It is a vast palace complex occupying nearly one-seventh of the Pink City. It was originally built by Maharaja Jai Singh II. The complex is divided into a series of courtyards, sprawling gardens and buildings. Currently palace is the resident of royal family and partially opened for visitors. Royal Observatory, also commonly known as Jantar Mantar, this UNESCO world heritage site is the largest of five astronomical observatories build by Maharaja Jai Singh during the period 1727-1734 in north India. Palace of Winds, also commonly known as Hawa Mahal, made with red and pink sandstone, sits on the edge of City Palace and extends to Women's Chamber.

In the morning after you will have your breakfast, our driver will be available at your disposal to take your towards Udaipur. It will be a 8-9 hours drive with mid-way stops. En-route you will be taken to the famous Chittorhgarh Fort and then continue drive towards Udaipur in the late evening and transfer to hotel. On-arrival check-in your hotel and relax overnight in Udaipur.

Udaipur City, most commonly known as the 'City of Lakes' is well-famed for its rich, varied and dynamic culture as well as heritage. Start tour by visiting below attractions and monuments:

In the morning take departure for Jodhpur, on the path you will be taken to Ranakpur Jain Temple – known for their sculptural work, this temple is famous for its intricate carvings and unique architecture. On-arrival in Jodhpur, check-in your hotel in the evening and stay overnight in Jodhpur.

After breakfast is done, drive to visit Mehrangarh Fort dominates the city and is the largest fort in all Rajasthan. Founded in 1458 as the site of Rao Jodha's new capital — hence the name, Jodhpur — the city has grown around it, and in the 500 years that have passed the fort has never been taken by force. Jaswant Thada, 1 km downhill from Mehrangarh, Royal cenotaphs built in marble, with a picturesque location next to a little lake. Umaid Bhawan Palace Museum – In 1944, this is the last palace built in India. Maharaja of Jodhpur lives here to this day, but half the building has been converted to a 5-star hotel. There is also a small museum on the grounds.

Later drive towards Jaisalmer, on-arrival check-in and relax overnight in your hotel.

After breakfast, we will start the Jaisalmer sightseeing. Jaisalmer Fort – Colourful shades of the setting sun and golden hues of the desert ambience give a fairy tale look to this mega structured fort. Ghadsisar – Is a rainwater lake which supplies water to the city. Sar means a lake. King Ghadsi of Jaisalmer got it made 650 years ago with the help of the people. Patwon ki Haveli – is a ten-minute walk from the main gates of the fort and quite magnificent. It's a collection of five houses, each one for the son of a wealthy trader who made money lending to the government. Bada Bagh – About six km out of town is an isolated cenotaph garden at the bottom of a hill where several dozen chhatri’s stand to memorialize local rulers. No bodies are buried here: these are empty "Tombs." The tradition of constructing these cenotaphs was discontinued in 1947. Stay night in Jaisalmer.

Jaisalmeris a place visited by tourists for its large desert. Most of the visitors prefer going for the desert safaris and night stay packages. Desert safaris are conducted either in the early morning or during the evening to avoid the sunburn / heat. Also, once the desert safari in Jaisalmer gets done, you can enjoy a delicious meal alongside Folk musical dance performance that showcases the local culture of Rajasthan.

After your dinner, night stay will be in a tented accommodation.

In the morning drive towards Bikaner, this city is a "Cultural paradise and traveller's haven" in Rajasthan. Bikaner is famous for architecture, art and culture, filled with colour, festivity and cultural marvels. The city will fascinate you with the camels wandering over the beautiful sand dunes, its ancient palaces and forts. Best known for "Camel Farm" for breeding some best-known riding camels, Bikaner also happens to house one of the only two models of the biplane used by the British in World War 1.

Junagarh Fort-The fort was initially called Chintamani and was then renamed as the Junagarh. The foundations of the Junagarh fort was built in 1478 by Rao Bika. The present grand structure was inaugurated on 17th February 1589. The Karni Mata Temple, also known as the Nari Mata Temple or 'Rat Temple', is a 600-year-old temple located around 30 KM from Bikaner in a small town of Deshnok in Rajasthan.

Junagarh Fort-The fort was initially called Chintamani and was then renamed as the Junagarh. The foundations of the Junagarh fort was built in 1478 by Rao Bika. The present grand structure was inaugurated on 17th February 1589. The Karni Mata Temple, also known as the Nari Mata Temple or 'Rat Temple', is a 600-year-old temple located around 30 KM from Bikaner in a small town of Deshnok in Rajasthan. Best known for "Camel Farm" for breeding some best-known riding camels, Bikaner also happens to house one of the only two models of the biplane used by the British in World War 1.

Mandawais a picturesque little town in the Jhunjhunu district of Rajasthan. It is in the heart of the Shekhawati region and is marked with palaces and splendid mansions (Havelis). The atmosphere and ambiance of the place reflect the social and cultural environment of the place. In the morning visit for various havelis like Hanuman Prasad Haveli, Double Haveli and Jhunjhunwala Haveli in Mandawa. Take drive to Delhi, reach Delhi in the late evening and have dinner, then our driver will drop-off at your hotel.

Delhi - The capital of India, is a cosmopolitan city with a historic old Delhi and the modern New Delhi. From historical monuments to modern shopping malls, from an extensive network of the modern-day Metro system to peddled Rickshaws, Delhi has various personalities and is considered to be the city with a heart. Start your tour with Jama Mosque - Mughal emperor Shah Jahan got the Jama Masjid built between 1644 and 1656 on a massive budget. The mosque still has three huge entry gates standing since 1656. Chandni Chowk Market - One of the oldest markets in Old Delhi, Chandni Chowk is still an important historical site renowned for the availability of every kind of goods as well as food. It was Constructed in the 17th century by mughal ruler of India Shah Jahan. It is situated opposite the Red Fort. The Red Fort was the official seat of Mughal rule and authority from 1648 onwards, when the 5th Mughal emperor, Shah Jahan, decided to move the capital of the empire from Agra to Delhi. Constructed using red sandstone, it remains one of the architectural marvels of the Mughal era. In 2007, it became a UNESCO World Heritage Site. India Gate - The All India War Memorial, popularly known as the India Gate, is a war memorial located in New Delhi. It is dedicated to the 82,000 soldiers, both Indian and British, who died during the First World War and the Third Anglo-Afghan War. Humayun’s Tomb - This is the first garden-tomb on the Indian subcontinent. It is a UNESCO World Heritage Site declared in 1993. The tomb was custom-built by Humayun's son Akbar during 1569-70. Lotus Temple - Commonly known as Lotus temple, it is a Baha'i Houses of Worship, the Lotus Temple is open to all, regardless of religion, or any other distinction. Qutab Minar - At a height of 234 feet, this minaret is the tallest individual tower in the world and is a perfect display of Mughal architectural brilliance.

Later depending upon your departing flight schedule, our driver will drop-off at the Delhi International airport. Tour End 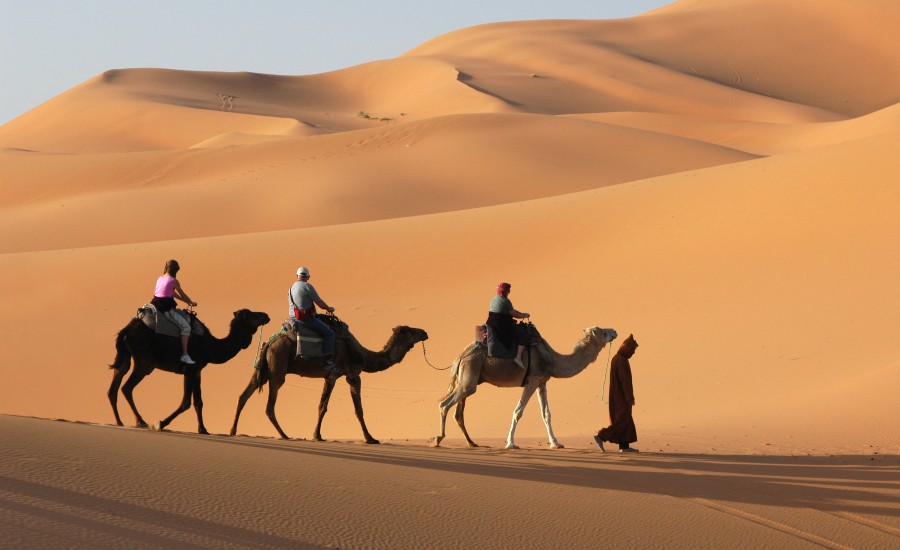